„It is too easy to assert that those with whom we disagree are not just wrong but tyrannical, fascist, genocidal. But it is also true that certain ideologies are a danger to the public and need to be identified as such. These are closed fundamentalist doctrines that cannot coexist with other belief systems; their followers deplore diversity and demand an absolute free hand to implement their perfect system. The world as it is must be erased to make way for their purist invention.“ – Naomi Klein from The Shock Doctrine: The rise of disaster capitalism.

And the one who was seated on the throne said, „See, I am making all things new.“ Also he said, „Write this, for these words are trustworthy and true.“ -Revelation 21:5

„Home is where the heart is.“ -Peter, Paul and Mary

We shape our surroundings to embody the attitudes and ideas we respect. In the case of certain neighborhoods, surroundings may reflect a collective set of ideas. In gated, or vastly affluent communities, those set of ideas are protected and defended against any contaminant that threatens the status quo. John Gossage’s contribution to the genre of artist book called The Thirty-two Inch Ruler/Map of Babylon is a look into power and privilege implied in the surroundings of his own neighborhood of Kalorama, Washington DC.

Gossage prefaces his images by informing us that Kalorama’s most famous (or infamous) resident is the former Secretary of Defense Donald Rumsfeld. Kalorama is an area where the private homes are interspersed among embassies and the residences of ambassadors. It is a community that is patrolled by three overlapping public security forces as well as the occasional private one when important dignitaries come to visit. Gossage describes it as, „A place of beauty and calm that you might choose to live, if you could. A place that makes visual the affectations of wealth and political power.“ 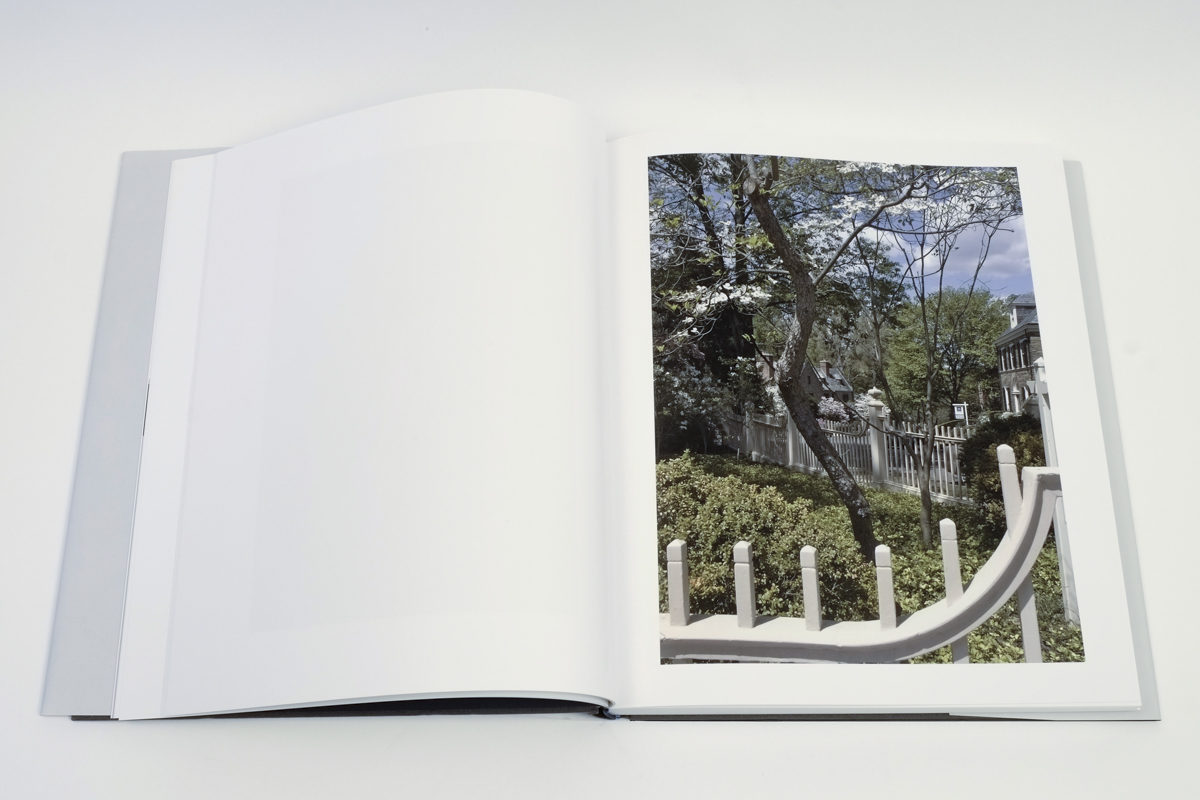 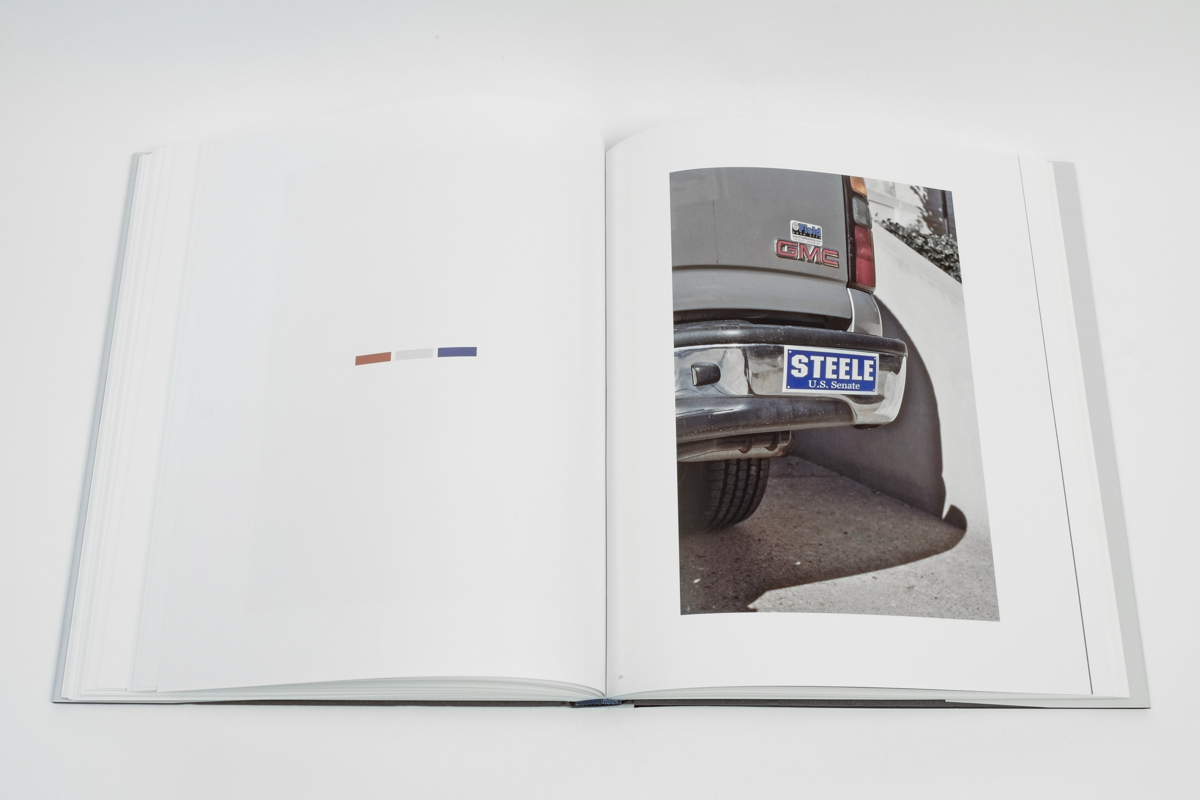 With such prodding, The Thirty-two Inch Ruler ‘side’ of the book draws the ideologue out of you. Most will have a tendency to find this portrait disturbing as it comments on the heritage of privilege and how the powerful can shape the world to their vision of what they think is best to meet everyone’s desires (or at least the desires of the few that are important). It is the desire for the clean slate upon which to draw perfection. That may at least be the idea.

What Gossage shows is this ideology of the ruling class intermingled with small fissures that chip the foundations. The easy read is that it is a portrait of a crumbling empire but instead it seems to speak of one that is settling deeper and growing stronger roots – a foothold against contaminants. His color photographs, with their identifiable style of very shallow focus and attention to detail overflowing with metaphor, toy with our fear of powerlessness and yet appeal to our desires of wealth and power. Although we may despise Rumsfeld and this administration’s power grab and bully tactics – and by extension Kalorama is the physical representation of those policies – it is the American Shangri-la which we also secretly covet. 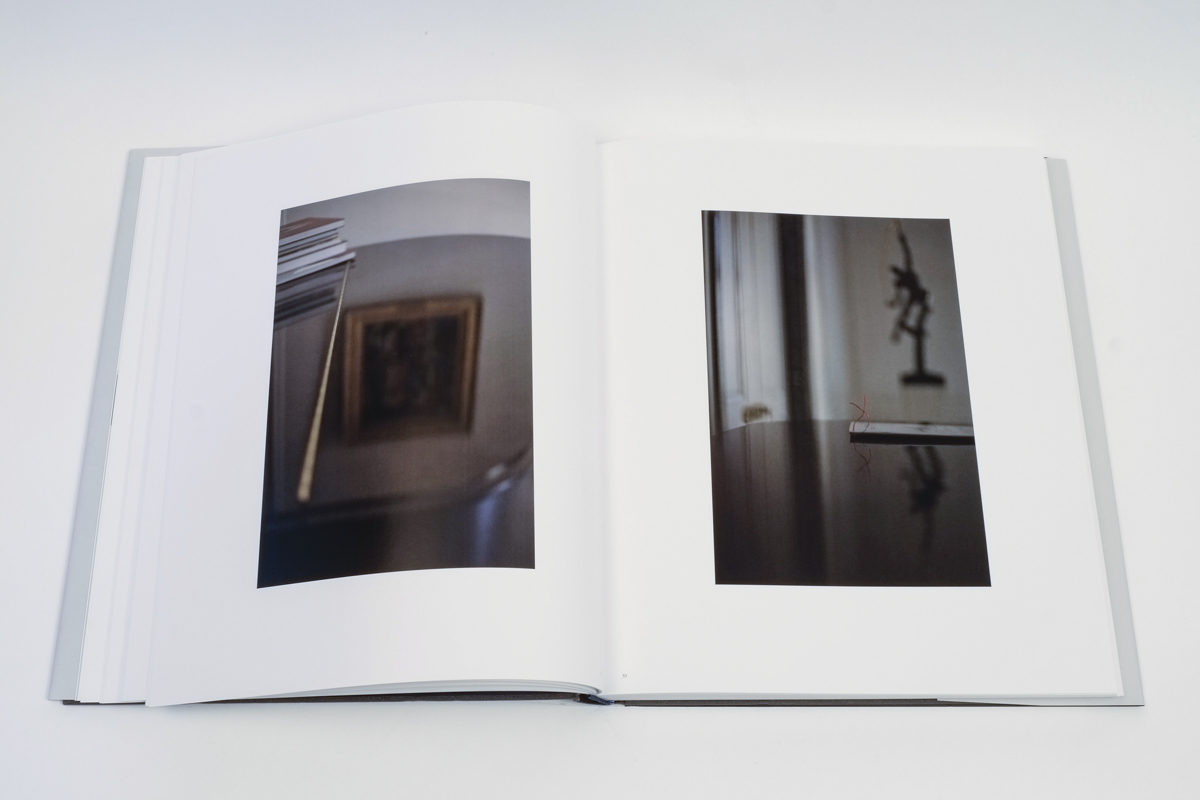 Gossage’s vision of this neighborhood is emptied of any human presence other than his own. Yards, fences, sidewalks and doors are all examined and the tone is that we don’t belong and certainly a camera in this area would draw much suspicion. Gossage may belong as a resident but he is a spy among the hedges trying to see evidence of what this has all cost. What proof can be gleaned from these small details that speaks to the wider ‚belief systems‘ and our aversion to them?

Gossage’s ‚ruler‘ (a play on words – read ‚de facto dictatorship‘) is shortened. The ‚haves‘ measure with a different scale that doesn’t reflect the reality faced daily by the ’nots.‘ It is a split quantity that benefits some and short changes others. It is fitting that the 32-inch ruler that spans the first few pages is from a federal bank, and even more fitting that it is one that has since changed its name.

When the book is flipped we find another body of work called Map of Babylon, upon which one page states these are ‚Photographs with qualities, but no real explanation.‘ If we tend to read the Kalorama photos as a physical manifestation of an ideology then the Map of Babylon places us back into the real world with all of its imperfections. It is a mixture of diversity where heritage blends with the nouveau riche in a world built by the proletariate. The first photograph is of a door peephole, and if one happens to look at the ruler side first, it is natural to deduce that we are looking out through our protective door of affluence into what we keep at bay and fear. Certainly not a horror show of crime and chaos but our ‚drift of affluence‘ has pushed our tolerance meter to zero. The contaminants approach. 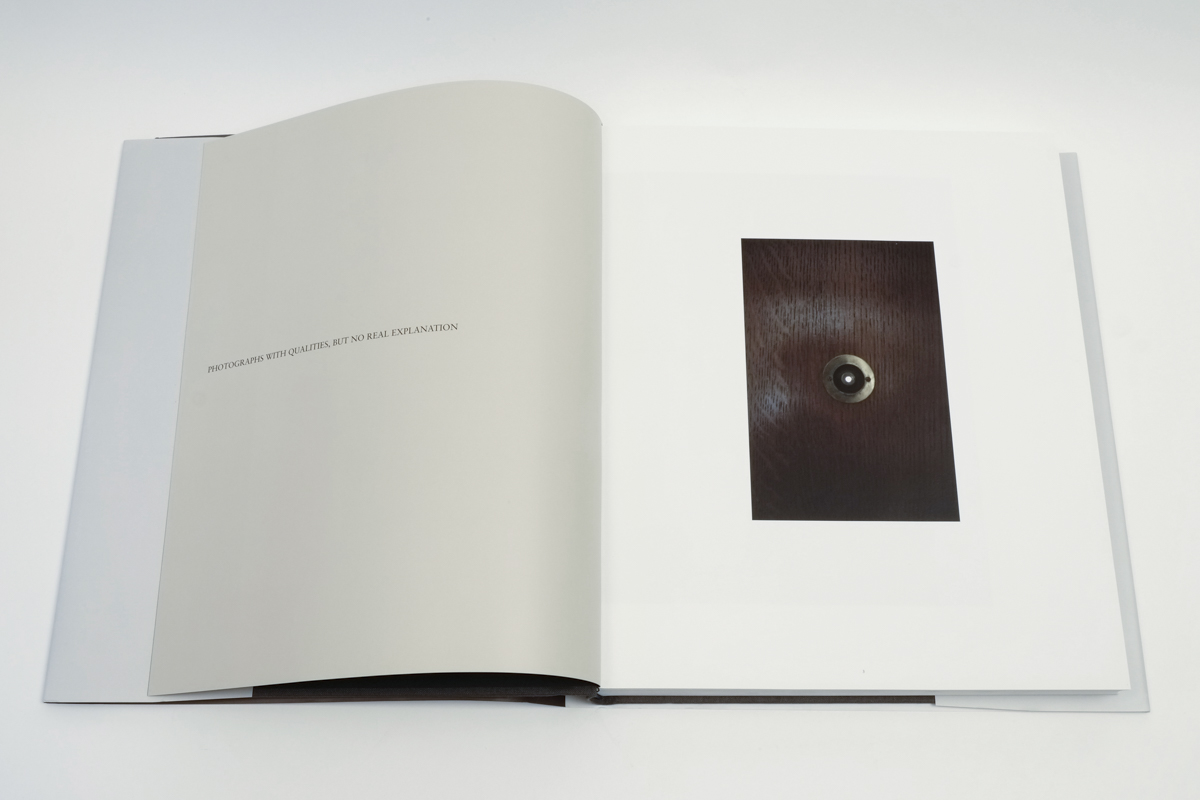 What form those contaminants take is a landscape of crushing debt to the Chinese, religious conflict, reminders of tragedy and war, dismembered hands and spilt blood, danger, short-term fixes, offensive decay and markers of defenselessness and vulnerability. We become aware of what were previously innocuous still-lifes and imbue them with signals full of meaning and the propaganda of blind fear promoted by the powers-that-be. The last image of a darkened doorway offers only a slight glimmer of hope with a pin-prick of light emanating from the peephole (you guessed what is on the other side, just flip the book). 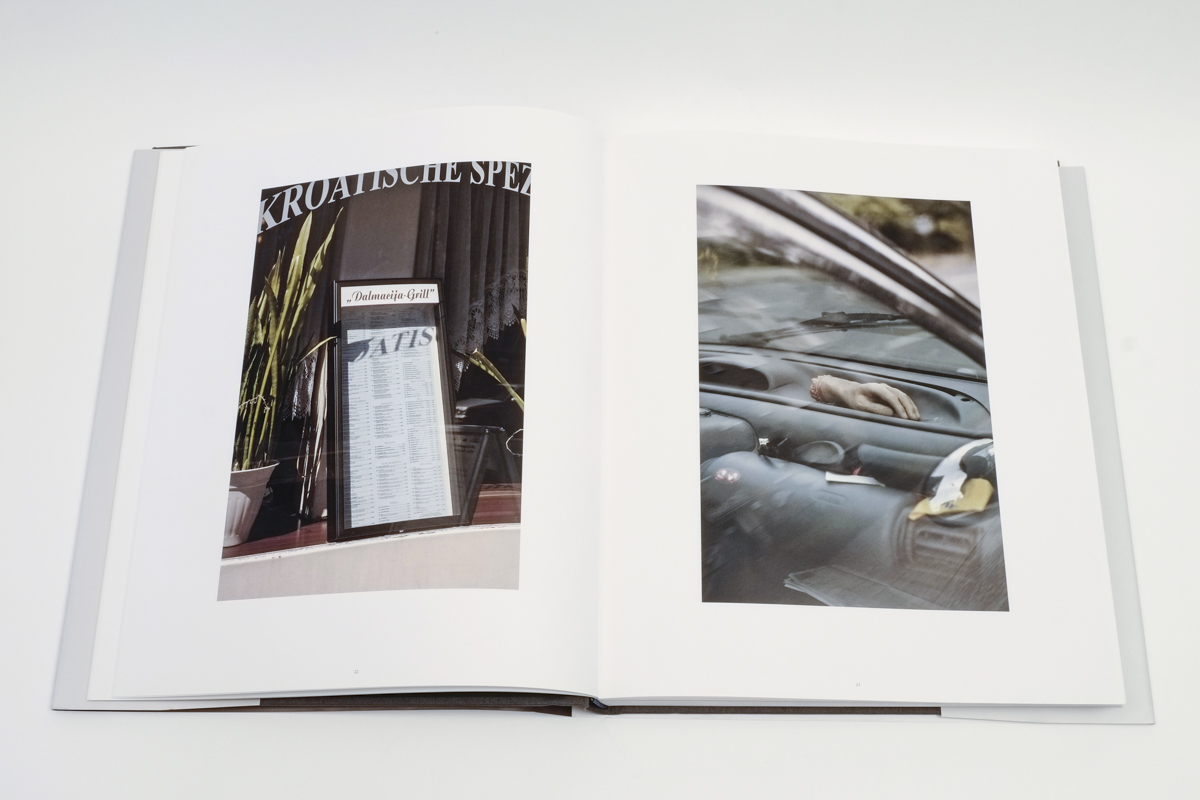 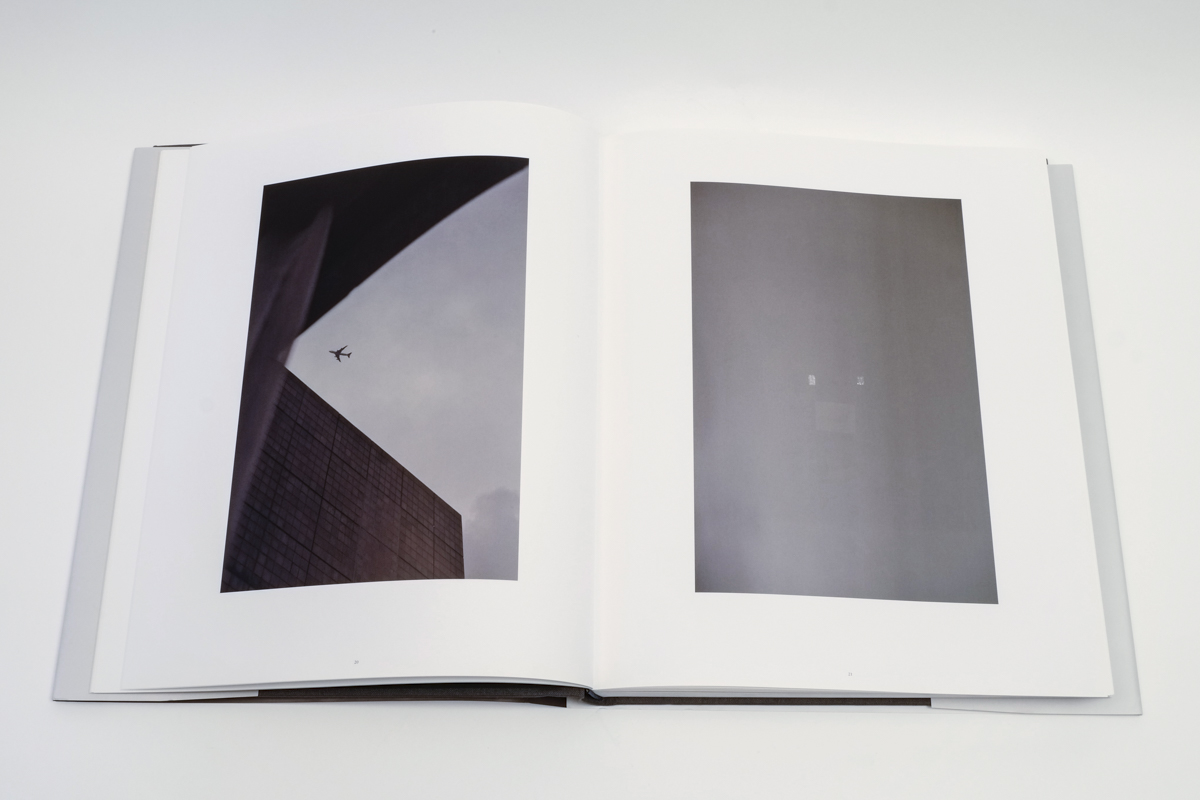 The Thirty-Two Inch Ruler/ Map of Babylon is an ongoing cycle, two chapters which hold no order or hierarchy over one another and have no correct starting or finishing point, they just turn on themselves, over and over and over…

This article was originally published on 5B4 Photography and Books January 23rd 2009. All images are from „The Thirty-Two Inch Ruler/ Map of Babylon“ by John Gossage.

The Thirty-Two Inch Ruler/ Map of Babylon at artbooksonline.eu